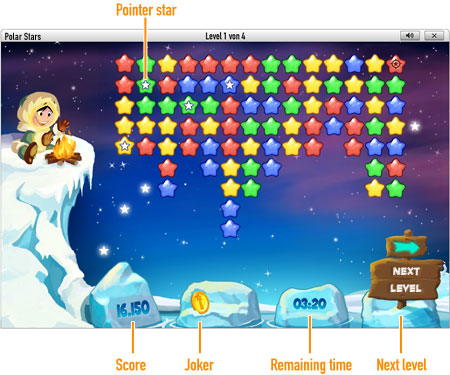 The object of Polar Stars is to clear groups of like-colored stars , revealing the smaller, white pointer stars. Additional points can be scored by totally clearing the board.

You have 4 minutes to complete the game.
Points are awarded as follows:

Clearing a star: You receive 50 points for each star cleared.

Completing a level: You receive 10,000 points for each level you complete.

Totally clearing a level: You receive 3,000 extra points if you manage to totally clear a level.

Joker bonus: You receive 500 points for each remaining joker at the end of each level.

Ultra-pop: If you clear a group of stars containing more than 10 stars, then the total points for that group will be doubled .

Mega-pop: If you clear a group of stars containing more than 20 stars, then the total points for that group will be tripled .

Some stars contain a joker icon. You can collect one of four different jokers by clearing one of these stars. The jokers can then be used to clear the board. Unused jokers will earn you extra points, so it's best to complete levels without them.

This joker clears a single star.

This joker can be used to clear an entire row of stars.

This joker can be used to clear an entire column of stars.

This joker can be used to shuffle all stars on the board.