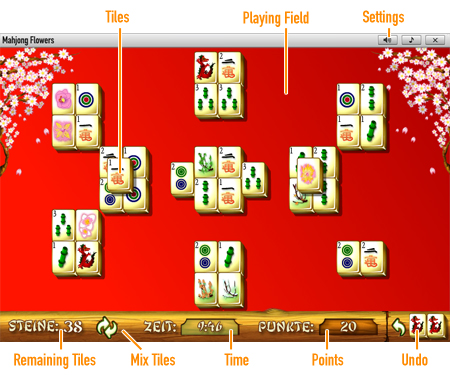 Find all tiles bearing identical symbols and clear them before you run out of time.

How do you clear tiles?

Only the top-most tile (bamboo 3) is free. The other four tiles are covered.

Only the two outter tiles (bamboo 2 and bamboo 1) are free. The others are blocked from both sides.

How many symbols are there?

There are 40 different symbols. They are divided into 7 groups: Chinese characters, bamboo, circles, winds, flowers, seasons and dragons.

Which tiles are matching pairs?

A matching pair consists of two tiles that belong to the same group and bear the same symbol. There are only three exceptions: Seasons, flowers and dragons can be mixed and matched within their groups.

Not Matching: different groups and symbols

The game has three levels. In each level, the number of tiles increases. You have a time limit of 10 minutes to eliminate all of the tiles. If the time is up before the end of the game, the game is over. If you reach the third level, a Chinese surprise awaits you!

For each cleared pair, you will receive 20 points, but the real excitement lies within the series bonus: a series is formed when you clear a matching pair of tiles that bears a value of exactly 1 more, 1 less, or exactly the same as the pair that was cleared immediately beforehand. The longer the series becomes without breaking it, the more the series bonus will be worth. The series bonus increases by +50 points per matching pair. You can form the longest series bonuses in the groups "Chinese characters," "bamboo," and "circles."

Another tip: A series will not be broken by mixing the tiles, nor will it be broken by completing a level. By taking care, you can use this knowledge to form longer series.

Using this button, you can cancel a pair of tiles that you just removed. Please note that for each "undo move", 50 points are deducted from your score.

Not all paths lead home. If you get to a point where you think you cannot get any further, you can mix the tiles. You will not have any points deducted for mixing the tiles if no further moves are possible. If you mix the tiles although additional tiles could have been cleared, then points will be deducted: the first time you will lose -50 points, and each additional time will increase the deduction by another -50 points. Despite the deducted points, it is still sometimes a good idea to mix the tiles, such as to continue a series. Mixing tiles does not end a series bonus.

If you have selected a tile, but would rather select another, click the tile again, and you will unselect it. Once you have cleared a pair of tiles, they cannot be placed back onto the board. If you would like to abort the game, then click on the "X" in the upper, left-hand corner of the board.

The path to a higher score in Mahjong Flowers is not so much dependant upon speed, but more upon the way you create series. It is always worth taking a good look at the game board before clearing tiles so you can make sure you score the most points possible. In doing so, make sure you always keep an eye on the time. You will only earn your surprise once you have completed all three levels.