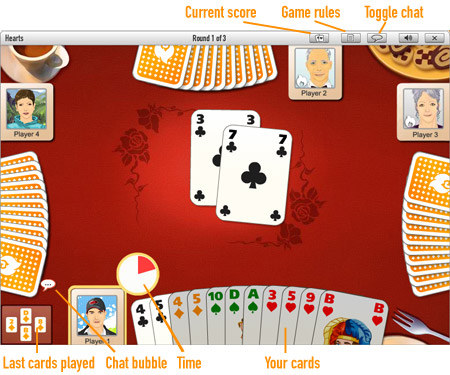 Select the three cards you would like to swap by selecting them with your mouse. Then click the "swap" button to exchange them for others.

Play a card by clicking on it.

You can click the "current score" button when playing in a multi-round duel to see a detailed overview of the preliminary results.

Sounds can be turned on or off by clicking on the speaker button.

You can chat with your opponents in each and every game of "Hearts".

To open the chat box, simply click on the speech bubble next to your avatar. Alternatively you can simply press the ENTER key. 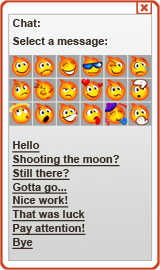 The chat box contains a list of preselected messages and smilies that you can use to communicate with your opponents. To send one, simply click the one you wish to use.

The game does not end if a player prematurely quits! Instead, the GameDuell Granny or Gramps will take that player's spot.
The GameDuell Granny and Gramps are computer opponents that can never win. They both play "without score" and will always end up in last place no matter how many points they actually earn. This makes the game even more thrilling for the remaining two/three players
Computer opponents may also be preselected when configuring a "Hearts" table, opening the door to two or three player games. As always, computer opponents can never win - the best, real player wins.