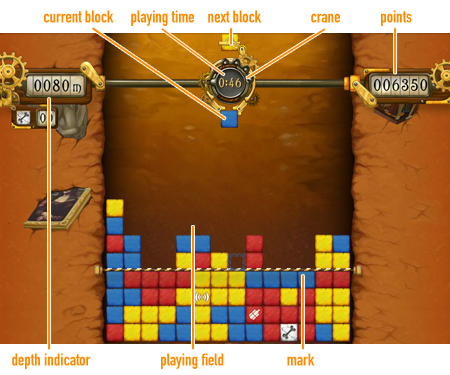 You can freely move the crane above the playing field and therefore place blocks anywhere. The number of available blocks is unlimited.

If a block dropped from the crane lands so that it forms a group of 3 or more same-colored blocks, the blocks disappear. In certain cases, a chain reaction may be triggered when blocks are dropped from above.

Note: Larger groups of same-colored blocks are often already located in the playing field. However, these also can only be cleared as soon as another block is added.

In order to advance in the game, you have to clear all the blocks above the mark. Once this is done, you will automatically dig a few meters deeper into the ground and new blocks appear.

In order to extend the short period of time at the start of the game and to be able to dig deeper into the ground, you have to collect fossils. Fossils are collected automatically, as soon as no additional blocks are located above the fossil blocks.

In Fossil Fever, you basically control the game only by using the crane at the top of the screen. 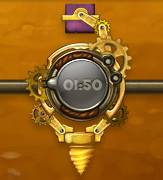 When you clear blocks in rapid succession, a drill appears in place of the current block in the crane. The drill can - just like a regular block - be dropped anywhere on the playing field. The drill removes an entire column of blocks as it works its way down.

Note: When special blocks are struck by a drill, their effect is automatically triggered.

Special blocks are identified by the additional symbol on the front of the block. A special block is triggered when the block is part of a color group. For example, in order to clear a red "bomb" special block, you have to group it with at least 3 other red blocks.

The bomb removes everything within a radius of 3 blocks, starting from the center of the bomb. Additional bomb blocks in the explosion radius are also triggered - however, all other special blocks are destroyed.

The sound wave removes a complete row - namely the row in which the sound wave block is located. This can, similar to the drill, trigger other special blocks.

The color joker removes all blocks of the same color from the playing field. This often triggers a larger chain reaction - therefore, this block is especially rare.

Collect fossils to get a surprise