Each tile is worth the number of points shown on it. A Joker tile is worth 50 points and can generally replace any tile in the game.

The aim of the game is to clear your board by placing all of your tiles on the table.

The game play and game rules are similar to the popular game, Rummikub. Players familiar with this game will feel right at home playing Okey. As in Rummikub, it is only possible to place tiles in certain combinations.

Before the first move is made, each player gets 14 tiles which are only visible to the player they are dealt to. The remaining tiles are placed face down in a pile to the left on the table.

To start the game, each player has to place a so-called 'series' or 'combination' of tiles on the table. This first combination (or combinations, if a player can put down several) must have the sum of at least 20 points, when the face numbers are added together.

In the first move, it is not permitted to use any of the tiles that were placed on the table by other players.

What is a series?

There are two different types of series, also called combinations: 'Groups' and 'Rows'.

If a player does not have any valid series that add up to 20 points, they are unable to make their first move and must pick up a tile from the pile. After picking up a tile, the turn is over.

Once you have made first move, you can place tiles with any number of points on the table.

This can be done either by placing new series (i.e. groups or rows), or by manipulating or adding to series placed by others.

What does 'manipulating' mean?

What does 'add to a series' mean?

It means that you can place one of your own tiles to extend an existing series. For example, if there is a group on the table consisting of a yellow 5, blue 5, green 5, you can add to the group by placing a red 5. 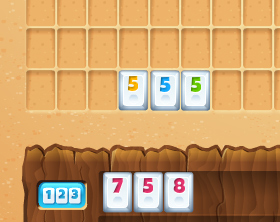 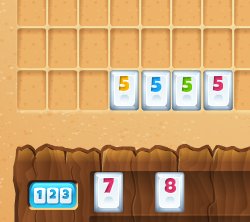 If a manipulation is not successful or does not comply with the game rules, the move is reversed and all tiles will be returned to their position before the manipulation. The player will receive an extra tile as a penalty and their turn will automatically end.

When does the game end?

The player who gets rid of all the tiles on their board first wins! The game also ends if there are no possible moves by the time all tiles have been picked up from the pile on the left. In this case, the remaining tiles on the boards are added together and the winner is the player with the least points. (This will be explained further in '3. Scoring').

There is a time limit of max. 50 seconds per turn. If the time limit is exceeded, all tiles that were moved or placed during the turn will be returned to their initial positions on the table or to the player's board. The player receives one penalty tile for exceeding the time limit. If a player does not make their move before their time is up for a second consecutive turn, they will automatically leave the game.

After a round, each losing player must add the points of their remaining tiles. The number on each tile indicates how many points it is worth, i.e. a tile with the number 3 is 3 points. The Joker is worth 50 points.

Each losing player will receive the sum of their remaining tiles as minus points. The player who places all their tiles and wins receives 0 points.

After all rounds have been played, each player's minus points are added up to calculate the final score. The winner is the player who has received the fewest minus points.